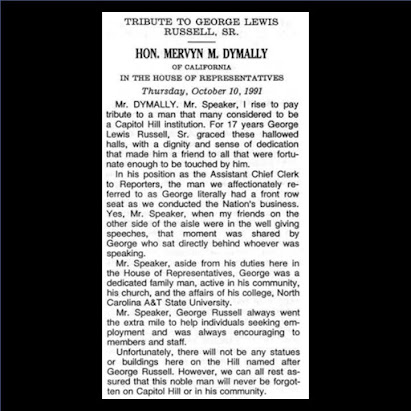 George Lewis Russell Sr., first cousin, two times removed, was the first black Assistant Chief Clerk for the U.S. House of Representatives and served in that role for more than 17 years.

He was the son of Joseph Samuel Russell (1886-1969) and Hattie McCauley (1887-1972). He was born in 1924 in Concord, Cabarrus County, N.C., and graduated from Logan High School in Concord and North Carolina A&T State University in Greensboro. He served in the U.S. Navy during World War II.

Cousin George died of a heart attack in 1991. Several members of Congress paid tribute to him, including Rep. Kweisi Mfume, (D-Md.), and Rep. Andrew Jacobs, Jr., (D-Ind.). This image from the Congressional Record is a tribute by Rep. Mervyn M. Dymally, (D-Calif.), on Oct. 10, 1991, in the U.S. House of Representatives. It reads:

“Mr. Speaker, I rise to pay tribute to a man that many considered to be a Capitol Hill institution. For 17 years George Lewis Russell, Sr., graced these hallowed halls, with a dignity and sense of dedication that made him a friend to all that were fortunate enough to be touched by him.

“In his position as the Assistant Chief Clerk to Reporters, the man we affectionately referred to as George literally had a front-row seat as we conducted the Nation’s business. Yes, Mr. Speaker, when my friends on the other side of the aisle were in the well giving speeches, that moment was shared by George who sat directly behind whoever was speaking.

“Mr. Speaker, aside from his duties here in the House of Representatives, George was a dedicated family man, active in his community, his church, and the affairs of his college, North Carolina A&T State University.

“Unfortunately, there will not be any statues or buildings here on the Hill named after George Russell. However, we can all rest assured that this noble man will never be forgotten on Capitol Hill or in his community.”