Family in black and white

Note: Guest blogger, Elizabeth June Torrence, is my cousin. It is a long, twisted, tangle of a story that we are working to piece together. We are both members of the Torrence Cousins research group, descendants of enslavers and the enslaved who have committed to digging up the past and setting the record straight. Here, Elizabeth shares her discoveries about her father as well as her discoveries about her family's Carolina roots and how we are related. Family is complicated. -- MNJ
Today I found my father in the 1950 Federal Census.

It shouldn’t be a big deal -- he wasn’t lost, in fact, I knew exactly where he was supposed to be.

Four years ago I probably wouldn’t have cared that on April 1, 2022, the 1950 census would be released. I wouldn’t have known that the indexing process will take months and probably won’t be truly searchable until next year. I wouldn't have appreciated seeing the facts published for posterity.

Four years ago I got my DNA tested by Ancestry and for curiosity's sake, I uploaded the data to GEDmatch. I didn’t know if anything life-changing would come from my results, but I was intrigued by the possibilities.

In the summer of 2018, I was contacted through email by Michele. She had found me through one of the search functions on GEDmatch, “People who Match One or Both Kits.” I matched both her and her friend. She told me she had roots in Charlotte, N.C., and her great-great-grandfather had founded a school that became known as the Torrence-Lytle School.

I had a tree on Ancestry that I shared with Michele. Most, if not all the information about the Torrences I had copied from a tree my brother Richie had built before his death in 2004. She recognized my ancestor Alexander Torrence as the same man who was in Judy Hughes’ tree, whom she had met through Facebook, and she asked if I minded including Judy in our conversation. We grew as a group from there and I now had a purpose for researching my Torrence family of my own.

I knew my father was born in Charlotte, but in my head, he was from Virginia. Looking back now I realize that I didn’t really have a clue where he was from. I have his high school yearbooks from Tennessee and one from his year of college in Kentucky. He met my mother in her hometown of Fort Payne, Alabama, and I grew up in Atlanta, Georgia, where I have some vague memories of him talking about streets and places he knew as a kid.

My father died when I was 11 years old and for most of my childhood struggled with alcoholism. Since I was just a kid I was never told much, but I caught pieces of things here and there. One of the very few pictures I have of my dad as a child I was told was taken at the children’s home, and on the back are the names of the other children in what I know now is my Aunt June’s handwriting. 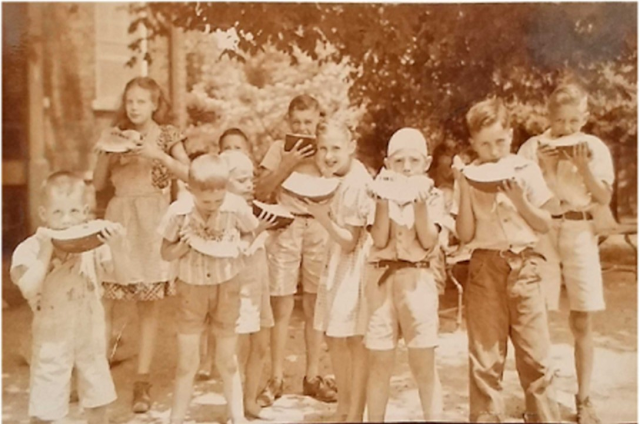 That’s my dad on the far right, and my Aunt June is the tall girl on the left.

See, in 1950, my dad and his older sister were living in the Southern Christian Children’s Home at 1101 Cleburne Avenue in Atlanta. The Jimmy Carter Center is now located on that property. That’s how, even without an index, I could find my father in the census.

When I opened this image I burst into tears. There he is, Richard H. Torrence, Orphan, age 12. Except he’s not an orphan.

It’s one thing to hear the stories -- it’s another to see them in black and white. The boy listed just before my father is also in the picture above. Some of the other children in this photo are listed in the census as well and I wonder what their stories are. Were they truly orphans, or were they placed there under similar circumstances to my dad and aunt? The census doesn’t tell the full story.

That story, like so many of ours, is a work in progress.

Through our little group of cousins, I’ve totally expanded my research skills. I was really a novice when we first started exchanging emails in 2018. When I’m not working on puzzling out our various relationships from the era of slavery in North Carolina, I’m trying to piece together a timeline of my father’s life before he met my mother. Finding the little clues and sharing them with my mother has generated so many memories she has of things my father told her during their 24 years of marriage that she had never and would probably have never shared with me. She is really my only primary resource and so many of her random memories have been borne out through records I’ve found online.

It’s the combination of stories passed on and the records we find that make the whole picture possible and I’m truly grateful for that courageous email from Michele that started me on this quest. I told her then that I was ready for whatever we found -- good, bad, or ugly -- and I’ve found some of each, but I’m better off for all of it.