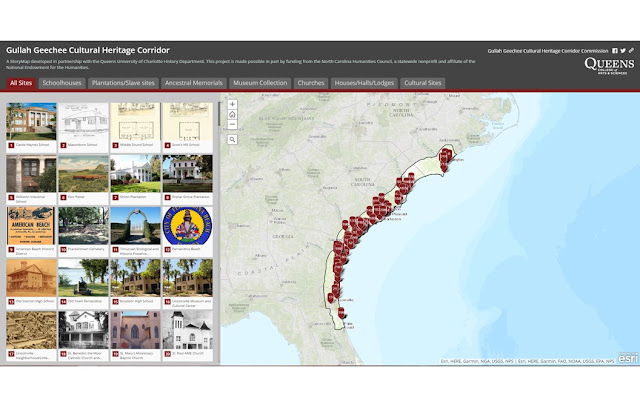 A new interactive map highlights historic sites in the Gullah Geechee Cultural Heritage Corridor, a region that includes the barrier islands and coastal mainland communities from Pender County on the southern coast of North Carolina to St. Johns County on the northern coast of Florida.

Gullah Geechee describes a language, culture and a people, the direct descendants of enslaved Africans brought to America to labor on coastal plantations. The Gullah Geechee people lived in relative isolation on the plantations and later as free people in small island and mainland communities in the Carolinas, Georgia and Florida. As a result, they were able to retain and pass down many of their ancestors' African traditions, languages and foodways.

The map was developed by Gullah Geechee Cultural Heritage Corridor Commission in partnership with the History Department at Queens University of Charlotte. The project was funded by the North Carolina Humanities Council, a statewide nonprofit and affiliate of the National Endowment for the Humanities. Learn more.
Posted by Michele Nicole Johnson at 9:27 AM